Last week, many of my students forwarded me the New York Times article about female professors at MIT.  The article pointed out how difficult it is for women to get tenure—judging from how comparatively few do—and pointed out what universities such as MIT are doing to counteract the bias against women.

My response to all this?  Yes, there is compelling evidence that there is bias against women and it’s great that universities are acknowledging it.  But for those women who choose to have families, there is an additional structural problem with the tenure system in academia, which I believe is more to blame than bias.  Unless universities address this structural problem, things will not improve for women seeking tenure (nor for students seeking tenured women professors and advisors).

At most universities or professional schools, the tenure clock is seven to ten years.  During this period, you have to establish that you are the leading scholar in your field. “Leading scholar” has different meanings at different schools.  Some schools care most about the number of publications in good journals. Some care most about one big idea that pulls all your work together.  Achieving either of these in a race with time is a lot of work.  You might wonder how quality of teaching affects getting tenure.  Unfortunately, at most universities and professional schools, teaching (good or bad) has no impact on getting tenure.

Once you get tenure, the race with time is over or at least the pressure is gone and you have job security for the rest of your life with rare exceptions.  Let’s just think about this system for a moment.  Which business academic or consultant would ever recommend to a high performance company that they should give their employees job security for the rest of their lives—not to mention considerable power over the careers of others—based only on what they did in their twenties and thirties? Not many, I imagine.  But of course, this is a completely different topic and others have already discussed the pros and cons of the tenure system  (See Steven Levitt’s blog).

OK. Back to the structural problem.  For many women, the time they are on the tenure clock (the seven to ten years, often starting in their late 20s or early 30s) is exactly the time when they are starting a family and are most needed at home. Obviously, if their spouse is the primary care giver for their children, they can spend their days and nights working diligently on their tenure case while their spouse worries about diapers, doctor’s appointments, and homework.  But if their spouse is not the primary care giver, and for most of my women colleagues this tends to be the case, then they face a choice: either they step into the role of being the primary care giver and limit the time spent on their tenure case, or they hire third parties to take care of their children.  (This problem probably exists in other high-performance careers, but I am focusing on the one I really know.)

Of course, there are exceptionally talented women who can handle all the domestic activities, put in correspondingly fewer hours on their academic work, and still out-research and out-publish their peers.  But they are rare.

Most of us are more likely to lose out one way or the other.  I know many women who are tenured or on the way to getting tenured who deeply regret being unavailable during their children’s formative years.  They know they will never make up for all the time they took away from their children.  I also know of many women who chose to spend time with their children and did not get tenure.

Whose problem is this? Is this choice forced on women by the biological facts of life? I don’t think so.  Rather, I think it’s a bad system that can and should be fixed.

So how should universities think about this structural problem?  As the New York Times article mentioned, most respond by adding one extra year to the tenure clock when you have a baby.  But is one year enough?  Why not two years or five years?

If a person can produce tenure-worthy work in her forties or fifties, say, why should she already have been thrown off the tenure track? Conversely, if it is deemed unlikely that anyone could produce tenure-worthy work in her forties or fifties, what are we expecting from all those faculty who were given tenure in their twenties or thirties? Wouldn’t that have been just the time to assume they were washed up and fire them? What are the societal implications of highly educated women opting out of the workplace to care for their children, or conversely, outsourcing parental responsibilities to pursue careers that won’t wait for them?

I would love to hear from others on this.

There have been so many things to write about the last few weeks but so little time to do it.  I moderated a panel on work-life balance a couple weeks ago at HBS and I hope to write about it during the next few weeks.  But now, while it’s fresh on my mind, I want to write about high levels of product variety.

On February 23rd, the Wall Street Journal reported about proliferation of toothpaste SKUs.  According to the article, in January 2011, there were 352 distinct types or sizes of toothpaste at retail stores.  When one examines the functions, flavors, and sizes, there could actually be more than 2,000 combinations of toothpaste!  The functions include whitening, plaque prevention, gingivitis prevention, cavity protection, tartar control, long-lasting fresh breath, and baking soda & peroxide.  The flavors include brisk mint, frosty mint, cool mint, crisp mint, “cinnamint”, vanilla, watermelon, and bubble gum.  Toothpaste comes in gel or paste and there are multiple sizes.  So maybe 352 is not that bad after all.

But 352 is utterly confusing to consumers.  How on earth are we supposed to know exactly what we need when there are so many choices?  And the costs of this confusion are well documented in the marketing literature.  But as an operations professor, what worries me the most is all the waste associated with high product variety.  Clearly there are manufacturing costs associated with high product variety.  But there are also inventory related costs.  While it is easy to forecast consumption of toothpaste, it’s really hard to do so at the item level when there are hundreds of different types.  The difficulty of forecasting translates into poor management of inventory.  And there are costs at the store level (I wrote an academic paper on this topic).  High product variety drives store employees crazy because it complicates their operating environment. 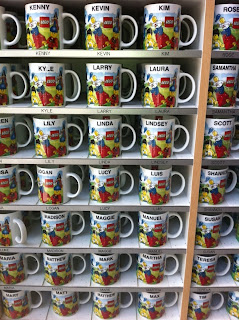 On a lighter note, I was at Disneyland with my family this weekend and I ran into a situation at a store that struck me.  My kids are really into Lego so our trip included spending time at a Lego store.  While my kids were amazed by the huge creations at the store, including a giraffe that took more than 250,00 pieces of legos to create, I kept staring at the section that displayed hundreds of different mugs differentiated by names.  Here is a photo of a small section:

Yes, maybe some people are excited to walk out of the store with a mug that shows their name.  But with the proliferation of names in a multicultural world, how many of the customers will actually be frustrated that their name is not in there?  Speaking of my family, none of our four names were available.  Maybe we are just a weird family, but I imagine there are many families that visit Disneyland that will encounter similar disappointment.

I have no idea how much a machine that does on-demand printing would cost, but the operations junkie in me kept thinking that there must be a better way to manage this situation.

More from the Blog